Alligators, A Snapping Turtle, And The “Never Again” Swamp Tour

Wonder Voyage is known for the off-the-beaten-path adventures we offer our teams. But there is really only one way to find those adventures… someone has to be the guinea pig. In the early years of the organization, that opportunity was once given to Michael Fleming in the swamps of New Orleans.

A youth pastor at the time, Fleming hired Shawn Small’s newly formed Wonder Voyage organization to lead them on a trip to Louisiana. Usually, the swamp tours were done very safely. Participants could feed alligators, but the alligators were more like pets.

“Teens took turns throwing marshmallows in the swamp as alligators swarmed at them. It was a great experience, but it was completely safe.”

In Fleming’s third year of New Orleans travel, however, Shawn came to the team with the look of adventure in his eyes. He had booked a different kind of swamp tour just for himself and the two pastors.

“We show up in the middle of nowhere,” Fleming remembers. “Just this small fishing boat for Shawn, the two pastors, and this crazy Cajun guide.”

When they all loaded onto the boat, there were life jackets, and no one knew where they were or where they were going. The guide said they’d be seeing alligators, snakes, and all sorts of swamp life.

Fleming laughed as he remembered his thought at the time. “It was crazy, but this was just like Shawn. I trust him fully, but sometimes he tests that trust.”

The bugs were thick and loud as they made their way through the swamp. The guide grew frustrated when he couldn’t find any alligators, but then Michael leaned over the side of the boat and saw an enormous alligator snapping turtle.

Fleming said the man immediately went into “swamp mode.” He grabbed a long pole with a snake claw at the end, closed it around the turtle’s jaw when it snapped, and then pulled the enormous creator into the boat. 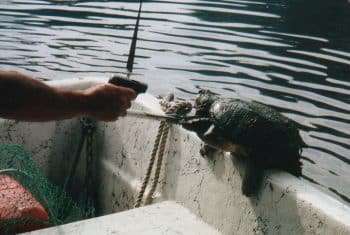 “It happened so fast,” Fleming said. “There was a loud pop-pop. A shell casing hit the other youth pastor. And then the swamp fell eerily silent and still from the echo of the gun.”

“Them are good eatin’!” the guide said.

Fleming admits the thought of death at the hand of this crazy Cajun crossed his mind.

Just when they thought the worst was over, the turtle made a loud noise and came back to life. The man pulled the gun back out and popped it two more times in the head.

“Shawn and I have been on a lot of adventures over the last 20 years,” Fleming said, “but we still laugh about this one. It might have been the best just because it was truly an adventure. There was no safety net. We didn’t really know this guy, and we put our lives in his hands.”

While Wonder Voyage still takes a lot of teams to New Orleans, this particular guide is not on the list of options. This was truly a once-in-a-lifetime experience.